James M. Nairn’s paintings began to influence other New Zealand artists. He was elected to the Council of the New Zealand Academy of Fine Arts, and for a time was its vice-president. However, because he believed artists had little say in the running of the Academy, and frustrated by the state of management at the New Zealand Academy of Fine Arts, Nairn and a group of enthusiasts founded in 1892 the rival Wellington Art Club. Lectures were held, sketches were exhibited and criticised and members were encouraged to draw from life. Each annual exhibition of the club proved a great success.

"There are sea pieces which might be anything from a volcanic eruption to a chart of the measles," wrote critic Gresley Lukin, describing James Nairn's work in an 1893 Evening Post article. Just a year later, Charles Wilson, writing in the opposition New Zealand Times, congratulated the Wellington Art Club, founded by Nairn, for "opening the first exhibition in the colony where the Mitre Peak is conspicuous by its absence".

The radicalism of their art united the Impressionists as they sought camaraderie and mutual support. Pumpkin Cottage was a meeting place for the artists and their movement. While Nairn died in 1904, aged just 45, a subsequent sell-out memorial exhibition of his work at the New Zealand Academy of Fine Arts helped build the mystique of Pumpkin Cottage. Pumpkin Cottage Impressionism was nationally popular for almost half a century after Nairn's death.

The artists were fond of sketching in the Hutt Valley, so Nairn, in about 1894, rented an old summerhouse cottage just north of Thomas Cotter's homestead, south of the road from Silverstream to the Hutt River road and rail bridges. This was intended primarily as a place to leave canvases to dry, but Nairn also spent weekends there painting with some of the members of the club. The cottage became a gathering point and headquarters for Wellington artists.

At the time the Hutt Valley and Silverstream areas were less developed than they are today and the surrounding district fulfilled James’ love of nature. A railway station close by made getting to the cottage easy and, so that fellow artists could identify the cottage, a big yellow pumpkin was placed on a pole on top of the roof.

Later, James painted a stylised pumpkin on the side of the cottage facing the road with the words: “Ye sign of Ye Golden Pumpkin” and Pumpkin Cottage became an artists’ retreat.

A house warming party was held in the form of a kitchen tea. Everyone brought some bric-a-brac that could be used by guests having meals or staying at the cottage.

Many days were spent at the cottage sketching and painting in the Hutt Valley. Over 2 hundred people visited in the first year of the club’s tenancy, many of them staying over the weekend. James Nairn caught a chill while painting in Motueka and died in 1904.

Later the club went into recess until 1906 when a group of enthusiasts revived the Wellington Sketch Club.

In 1942 Pumpkin Cottage again became available to the club for a nominal rental of 5 guineas.
This was eagerly accepted and members were happy to restore the link to the early days of the club’s history. Though the interior was in a bad state of repair because of floods, working parties soon had it comfortably habitable. The walls were covered with sketches and prints and even some palettes hung on the walls.

In 1949 Pumpkin Cottage was no longer able to be used by the Club as the owners, St Patrick’s Collage needed the place and so, sadly, the members lost what was perceived to be the best painting spot in the whole of the Hutt Valley.

The Wellington Art Club rented rooms in many places around the city -some daunting for their purposes but as the Club had plenty of experience restoring seemingly hopeless-looking places they were never put off by the challenges. Finally, in 1972 they came to the old fire station in Miramar Avenue where the present club rooms were planned.

In the President’s Annual Report for 1982, Joan Coleman, under the heading "A new home at last?" said: “A home of our own has always been our dream, and for many years we have always been shot from pillar to post, but now our own building is within our grasp.”

Pumpkin Cottage was demolished in 1980, even though there was a long battle to save it. 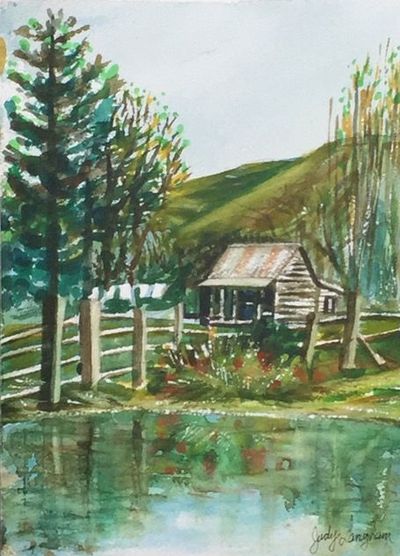 From the time our present day clubrooms were opened in 1984 on the Chelsea Street Reserve in Miramar, the wall facing the street next to the door featured a large pumpkin and the words, `Ye sign of ye Golden Pumpkin'.

In recent years its relevance was thought to be less important and it was painted out. Maybe this was a mistake. Preserving history is a tenuous activity, particularly for a volunteer organisation or club. Thank goodness for our excellent little book marking the centenary of the club, which was published in 1992, largely put together by Club member, the late Noel Goodger.

The story of Pumpkin Cottage is well documented in it but not everyone is familiar with its historic background or significance. The club's founder, James Nairn discovered the old house out at Silverstream during painting excursions back in the 1890s and rented it as a painters' retreat. Mabel Hill, an original member of the Club, said that `Nairn rented an old `But and Ben', hoisted a pumpkin on top of a long pole on the roof and called it 'Pumpkin Cottage' so that his fellow artists would see it. Later on he painted a large pumpkin on the side of the cottage and the words:
'Ye sign of ye Golden Pumpkin'.

Nairn himself died in 1904 and for a variety of reasons, including World Wars, the cottage was not used continuously.


It experienced a short revival of use from about 1942, but St Patrick's College whose land it was now on, required it from 1949 and it fell into disrepair, eventually being demolished in 1980.

Pumpkin Cottage history as part of Silverstream has been kept alive in Upper Hutt over the years at `Efildoog', a small gallery in the Akatarawa Valley run by Ernie and Shirley Cosgrove. Realising that their collection represented a significant part of the history of Upper Hutt, and realising that it was time to retire from running the gallery, Ernie and Shirley have gifted their collection including much history of Pumpkin Cottage, to Upper Hutt City. To mark the occasion of this generous gift, an official ceremony was held in the Mayor's Office on Monday 30 March, 2009.

Representing the Art Club in the absence of the President Jeff Collings, who was unfortunately unable to attend the reception, were Olympia Osborne and Phil Dickson. At the ceremony, the Mayor Wayne Guppy acknowledged the part that Ernie and Shirley played in developing and treasuring the Pumpkin Cottage history and gifting of their magnificent collection to the people of Upper Hutt. The collection will be housed at Upper Hutt's official gallery, `Expressions' which is in the same building complex as the Civic Administration and Mayor's Office on Fergusson Drive, Upper Hutt. It will be some months before the collection can be catalogued and housed or displayed appropriately, but will definitely be worth visiting once it is. 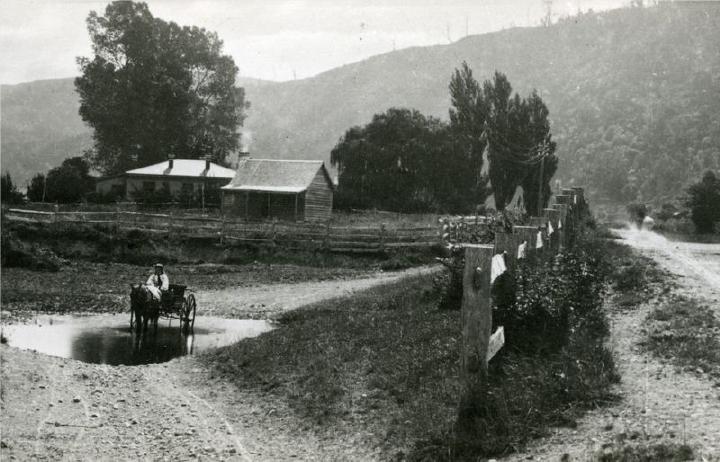 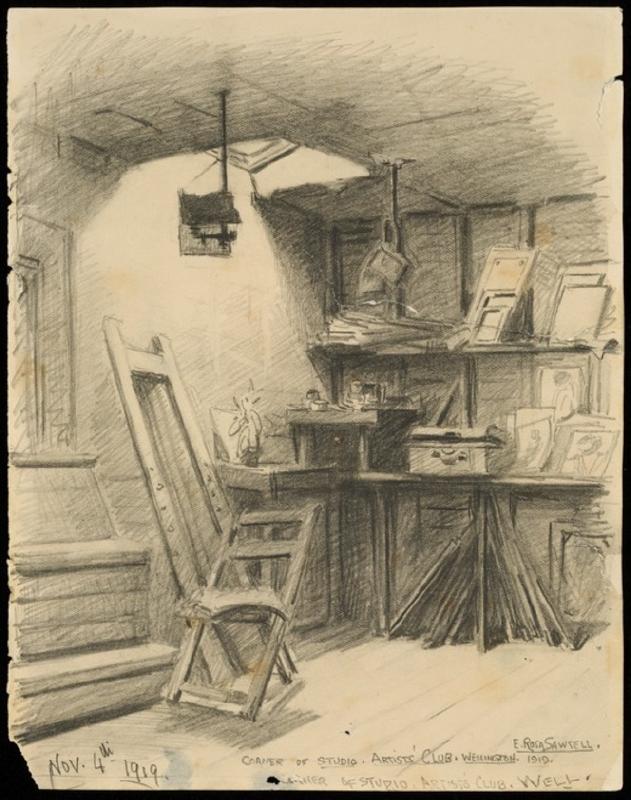 View of the corner of a studio at the Wellington Art Club, then in Bowen Street. Sunlight comes through a skylight. An easel leans against the wall with a fold-out chair in front of it. There are shelves along the adjacent wall with art supplies and pictures stacked on them, and frames stacked on the floor underneath.