The Pumpkin Cottage collection is a nationally significant collection of work from the early impressionist movement which was nurtured at the legendary Pumpkin Cottage, Silverstream, Upper Hutt. It features paintings by James Nairn, Mabel Hill, Girolamo Nerli, Frances Hodgkins and Nugent Welch among others. 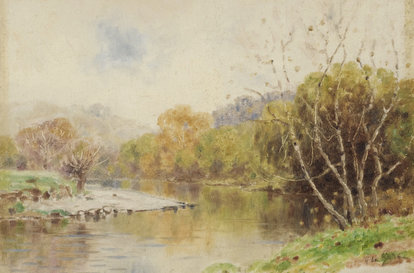 Gore captured a transitory impressionist moment in this rapidly painted scene of the Hutt River. Branches are decoratively silhouetted against the sky, while brightly coloured trees are reflected in the water. Harry Gore (1864 - 1930) was represented at New Zealand's first major impressionist exhibition - the second Wellington Art Club annual exhibition in 1894. From 1895 until his death, his steady influence as an official of the New Zealand Academy of Fine Arts in Wellington helped the impressionist cause. 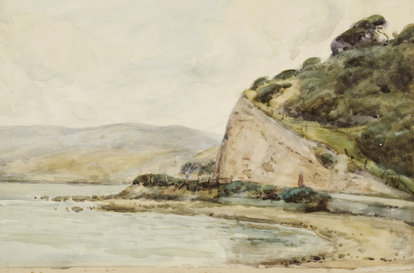 In the summer of 1910, a new literary, artistic and musical group, Wellington Arts Club, rented a cottage at Golden Gate, Paremata Harbour for 5 shillings per annum for the use of its members. The bach was owned by prominent local farmer William Bradey and had been used by James Nairn and members of the original Wellington Art Club about seven years earlier. In this fluid watercolour of the harbour, Sedgwick (1873 - 1922) rendered the clouds and windswept trees as curved decorative forms. Other Pumpkin Cottage Impressionists including D.K. Richmond, Nugent Welch, and young Roland Wakelin were also influenced by Art Nouveau from about 1906. By 1913, the Wellington Arts Club was in liquidation and forced to vacate its Bowen Street rooms and auction 300 books on art and paintings. Bradey's cottage was also required by its owner and the artists returned to Silverstream. 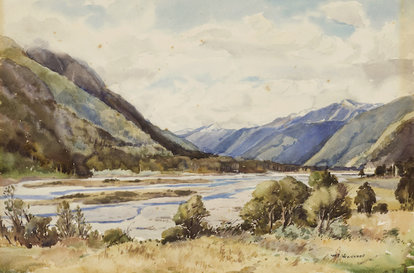 Bill Wauchop held powerful roles as president of the New Zealand Academy of Fine Arts and board member of the National Art Gallery. He was also associated with establishing the Kelliher Art Award in the 1950s. While he collected drawings by Christopher Perkins, he publicly denounced Modernist developments as 'crude and ugly'. Wauchop preferred traditional, 'inspiring' romantic imagery. The scenic landscape of the Taramakau Valley between Hokitika and Greymouth remained one of his favourite painting spots. 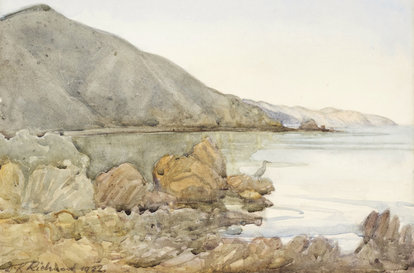 Dorothy Kate (Dolla) Richmond (1861 - 1935) returned to Wellington from an extended painting trip overseas in late 1903. She succeeded Nairn as Wellington's major Impressionist painter with overseas experience. She painted regularly around Silverstream and Heretaunga, but her family connections with York Bay were strong. In 1911 she bought a house there where she lived surrounded by paintings, books and her tame seagull. Richmond's Impressionist image of York Bay embraced a new technique of rendering the landscape as curved shapes, which was influenced by the organic forms of the Art Nouveau style. 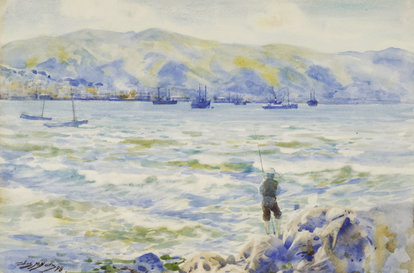 James (Jimmy) McLauchlan Nairn (1859 - 1904) often painted around Wellington Harbour. The fisherman calmly goes about his business near Roseneath, while the port bustles with shipping. A loaded vessel steams past other anchored ships waiting to dock, while two little sailing boats bob on the choppy sea. Nairn has captured Impressionist moments in characteristic blobs of pure colour for the viewer to mix visually.

In the winter of 1898 Nairn got soaked while painting outdoors and caught pneumonia, resulting in a long convalescence. Perhaps this painting was the cause of his near-death experience. 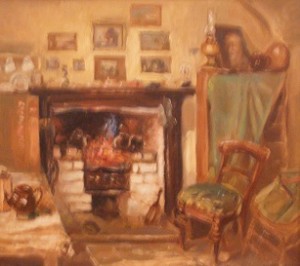