The Art Trail was a Big Success

From all the feedback we have received from the studio artists and visitors from as far afield as Kapiti and the Wairarapa, the Art Trail, held on 26th and 27th March was a huge success.

Starting off at the Clubrooms with a hot drink and tasty home baking, while admiring the great art work and clever demonstrators, the trailers travelled around the Peninsular using Phil's useful map.

Even though tired, the artists did enjoy the first time experience of welcoming visitors to their studios and chatting to them. Although there were about 150 tickets sold, not everyone managed to get around to every studio, but most artists had lots of visitors and some had sales. So a very big Thank You to so many people involved
in making the trail such a success and to those who, apart from opening their studios, contributed:

Thank you also to all who arranged the clubrooms, screens and who hung the paintings; to Club Members for ticket sales, emails, flyer /poster distribution, baking and afternoon teas and for all their help over the weekend.

Donations of $135.00 towards the Christchurch Earthquake Appeal were received during the day.

A Big Thank You to all members who baked a lovely variety of cakes, to those who helped with the tea and coffee and to everyone who helped make the day successful. It was heartening to get a plate of baking from a new member who was unable to help over the weekend. Visitors expressed interest in the club and we have
gained a new lady member from the exhibition.

Finally we would like to thank our sponsors for their generosity. We are most appreciative to:-The Larder, CPL Print, Sto european plaster systems, Miramar New World, Miramar Pharmacy, Miramar Fruit Supply, Gordon Harris, Marpet Merchants; and to various newspapers who published adverts and articles for us, and to all who displayed our posters.

Art Trail- reports from the artists

Olympia Osborne:
After being on an Art Trail in Eastbourne a few years ago, Del and I wanted to do the same in Miramar. We talked about it for years before deciding to do it. As a lot of our members live all over Wellington and up country, we thought it good to set up their artwork in our clubrooms as a “mini solo” and use that as a start-off base. We are always thinking of ways to have 27 Chelsea Street “on the map” hoping even local businesses would be made aware of our club. It used to be where the local library is now – imagine if we stillhad that position!

After a rainy Friday night, and not much sleep, the next day was fine and one after the other the
trailers started coming.

In fact, when someone apologised for arriving late - at 3.45pm – and I thought it was still morning.
With a croaky voice on Sunday morning, alone and nicely quiet to begin with, I started painting, until that day's trailers started arriving and it was interesting to meet a lovely gentleman in a trenchcoat, from Cornwall. He was visiting New Zealand on business and he had spotted our Dominion Post article. He was
very interested and told me that they do this in Cornwal l every August - every weekend for the whole month – and is going to email the information. The rain poured down around midday and I persuaded him to borrow an umbrella, which he returned at the end of the day with his coat over one arm, and holding an Evelyn McCutcheon painting with the other.

Another person, came from Newtown – I nervously asked what street as I had sneaked around after work on Wednesday putting flyers in letterboxes that displayed the sign “No Junk. No Advertising”. My excuse was going to be that I only picked the nice houses.

It sounds as though they had loads of fun at the clubrooms and there was a lot of dedicated work by
our committee and the backing of Mary Potter Hospice. Now we are looking forward to High Tea on Sunday.

Beverley Alexander: I think it was a great idea and I enjoyed very much meeting new people who came from far and wide. Congratulations to all who organised the event. Looking forward to the next one.

Evelyn McCutcheon:
Congratulations and well done to the team who organised our first Art Trail. I admit I signed up to the weekend with some trepidation, but I need not have been concerned.

Every one of the 120 plus visitors were interested in the painting, very considerate and appreciative of being
invited into our homes. I'm sure the event has put the Wellington Art Club “on the map” and gave the trailers a stimulating weekend.

It could not have happened without the hours of planning and dedicated hard work of our committee and talented
helpers. So again, grateful thanks and congratulations.

Diane Taylor:
I was thrilled with being part of the Art Trail. Everyone was really interested in the art,asking tips, fabulous people coming through, enjoying my garden, and they left saying “See you at the Roxy”

Len Maxim
I received forty one visitors for the Art Trail, and a similar number of my plein air painters from the water
colour group. It was a great chance to show them the painting experience I have enjoyed over the past
fifty years. It was as if I was the scene and they werethe approaching artists. Also, it was a win-win situation as the Mary Potter Hospice and the Art Club were getting the rewards. 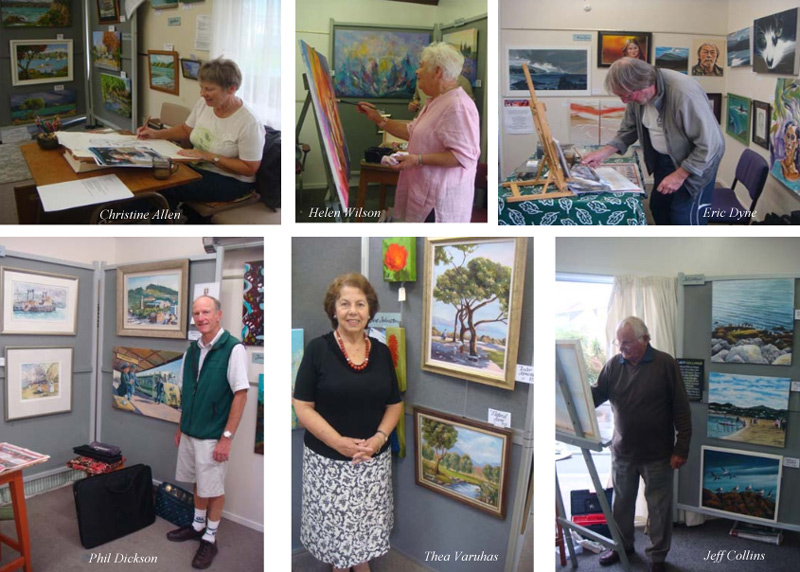