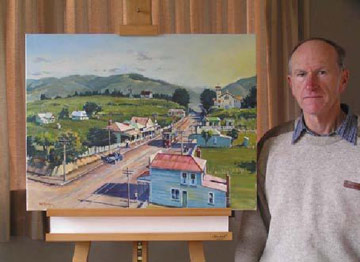 Phil Dickson's painting of Karori Road as it was nearly 100 years ago features on the cover of an all new hard-bound book which has been published recently. Featuring the suburb of Karori, the book is the product of the Karori Historical Society and has been some eight years in the making. "Karori and its people" is jointly published by the society and Steele Roberts Publishers.

Many people contributed to the book which is lavishly furnished with lots of old photographs, covering the suburb's history. Rather than further use of old black and white photographs on the book's cover, art work was commissioned. Phil was approached by the publishers to produce an artist's impression of Karori Road as it was in the early years of the 20th Century.

“The brief I was presented with was quite a challenge”, Phil said. “There were certain icons they wanted featured in the painting, and you couldn't see them all from any one place, quite apart from having to put the clock back on Marsden Village.”

To capture the village in the foreground, with the historic St Mary's Anglican Church on the rise behind, as well as feature Wrights Hill on the skyline out west required Phil to take an imaginary elevated position. Phil referred to lots of old photographs of the village and church as they are today, then had to estimate which

houses and shops might have been in existence at the time. He chose to place his Karori scene into the early years of trams so he could feature one coming through the village. The book was launched in mid June 2011 and everyone is very pleased with the total effort.

Karori and its people published by Karori Historical Society and Steele Roberts retails for $49.95