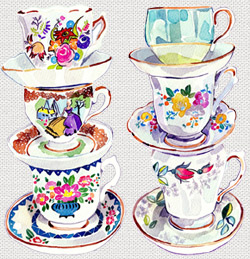 High Tea will be held at the Clubrooms
to celebrate the

Carols and Christmas music.
Bring your best teacup or mug.

Special Afternoon Tea:
contributions towards the table (sandwiches, cakes, savories) would be welcome.

Our 2012 Autumn Exhibition was held on the weekend of April 28th and 29th with our Patron and Wellington's's Mayor, Celia Wade-Brown being present for the opening on the Friday night. It was a successful attendance with friends and family – especially outnumbered by mine who voted my Oriental Bay painting for the “Peoples' Choice”.

We thank the members who bought along some finger food and everyone was charmed by our Del te Rito's handsome waiter grandsons – Renee and Vaughan – polite and smartly dressed in their white shirts. Nana was sooooooo proud!

We endeavoured to advertise as much as we possibly could and, although the sales were low, we received a lot of visitors over the two days. This was made all the more interesting with demonstrations by Phil Dickson, Shirley Sutton and Stanley Chan.

The Wellington Art Club was formed in 1892 and this exhibition gave us a good opportunity to celebrate our 120 Year history – the 1940s, 50s and 60s when the club had various studios around the city. We came to Miramar and occupied the old brick Fire Station from 1972 to 1983 after which we built our permanent home here in Chelsea Street. This was opened in 1984 and we are still very fortunate to have such bright studios for members to enjoy.

This celebration gave us a good time to bring out the old scrapbooks, and it was so interesting to see how past members enjoyed their time with the Wellington Art Club. And they did have good times, the art exhibitions and openings were grand affairs! Past members must be remembered for their efforts in keeping this club the warm, welcoming and inspiring club we all enjoy today. A club to use our talents and to grow as artists amongst friends with the same interests.

Thank you to Phil Dickson for his curating of the historical art – the hours he researched and put into producing the information to accompany each artwork. I find all our history fascinating, and I knew that Phil, a natural historian, would be the person to complete the display.

The Wellington Art Club is worth all the effort of members, committee members and friends past and present, because over the years, so many people have contributed to make it a rewarding recreation.

Painting With a Pallet knife – A Richard Ponder Workshop

As a very new member of the Art Club and keen to learn, I was one of the first to put my name down to attend this workshop. There were ten participants and we had a very productive and entertaining day. Richard's emphasis was on the effect of light in the landscape painting. He told us he was influenced by the works of the 18th century painter JMW Turner, and if we only learnt one thing from his workshop he hoped it was the importance of light in a painting. He explained and demonstrated how light reflects on objects and how to express this.

Richard commenced his instruction by loading up his enormous pallet with a huge amount of paint. We could use either oil or acrylic paint and the first step was to cover the entire canvas with a merge of colours – light to dark – using a pallet knife. We started at the top left of the canvas with a yellow/gold, then moved down diagonally with soft reds, next lilac, then onto the blues and finally a deep purple.

Richard described this as a “rainbow effect” and said he has used this technique in many of his paintings. Over this background we then painted an arrangement of bare Silver Birch tree trunks and branches with a bushy ground cover. The :light” was added to the trunks with reflecting tinges of the background lights. The technique was “wet on wet” and so, after every stroke the pallet knife had to be cleaned to ensure the removal of the particles of background paint it picked up. This caught me out a few times!

The workshop was conducted in a very friendly atmosphere with lots of opportunities to ask advice and lots of laughter. At the end of the day we had some very weary, but happy painters and a very colourful collection of paintings.

I enjoyed the experience so much I set off to the Art Club next day with a daisy sketch and two pallet knives and, following Richard's method, completed another painting which I entered in the Autumn Exhibition. You can imagine what a wonderful surprise it was for the “new kid on the block” to be told on my arrival at the Clubrooms, that my painting had been sold.

Would you be interested in opening your studios to the public?

Last year's Art Trail was such a success we are planning another, to take place next March. There will be no pressure on any member to take part but all members would be included. The folk who participated last year really enjoyed the experience.

We are announcing it early so you can give it some thought but we'll be contacting members nearer the time. We will have maps to help in finding addresses no matter where you live.

As before, the clubrooms will be part of the trail and members can display and sell their paintings both at the clubrooms and at your studios. 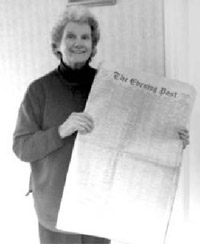 While having my ceiling insulated recently, the workman handed me a copy of The Evening Post, dated October 21st 1965! Having rested undisturbed in my roof for nearly half a century, the paper looked the worse for wear but, curious as to what was happening in Wellington at the time of printing I gingerly – after laying it upon clean newspaper – stepped back in time.

In world news: Our Prime Minister was Hon Keith Holyoake....Ian Smith, Rhodesia's leader was fighting for his country's unilateral independence....In Washington, Negro (sic) students were rioting in three Negro schools shouting “freedom” slogans....and in London a court awarded a husband £40 because his wife made him do extra household jobs.

In local news: The Foothills Motorway was in the planning and arguing stage....A portrait by Goldie sells for £660....There were three pages of Situations Vacant, many promising overtime...

Fashion and furniture ads were still being illustrated by commercial artists, while an advertisement for du Maurier cigarettes (priced at 2/6 for a packet of 20) took up a quarter page. 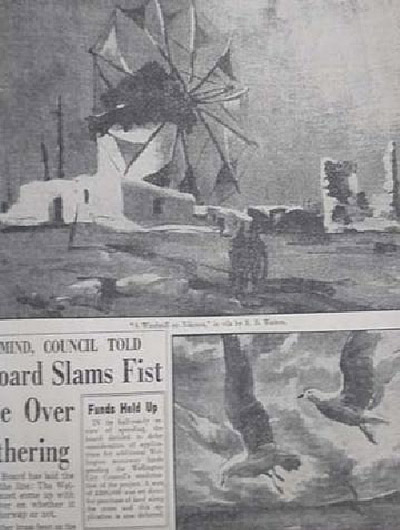 Letters to the editor:

These were mostly anonymous and included one signed “Just a Housewife” while “Common Sense” pointed out that the average elector would never reintroduce 6 o'clock closing. The ethics of Sunday Tennis were discussed and LC Smith argued for keep left rules for pedestrians. “Protest” asked what right the NBCA had in rejecting records by Bob Dylan (“Like a Rolling Stone”) and Donovan's “Universal Soldier”amongst others.“Is the NBCA afraid these records might wake up too many minds for their own good?” he asked.


On the leader page were two large photos with the header
“A Look at the Wellington Art Club's Exhibition”.

These showed an oil painting by RB Watson entitled “A Windmill in Nikolos” and a watercolour by NL Mercer entitled “I, The Gull”.

Sadly there was no writeup, but under the heading it did mention that 12 paintings were sold in the first three days.

The exhibition was held on the first floor of the DIC and featured in their advertisement.


Paintings - Top: "A Windmill in Nikolos" by RB Watson.
Below Right: "I, The Gull" by NL Mercer