We’re into January already and we’ve been clearing out a lot of stuff in preparation for the
year to come.

The “urinal” cupboard yielded up scrungy old brooms, old fluorescent bulbs etc. The cleaner washed the outside of the building and we will get some more quotes for Ranchslider doors, and for carpet squares to replace those which are looking a bit threadbare.

The exhibition in November was a huge success. Rymans did a big advertisement for us using Annette’s “Red Poppies” on their flyer. 45 paintings were sold with buyers enjoying our artwork, saying that they now look for the Dominion Postposter and how well the advertising works. Our thanks to Shirley Sutton for her donation of artwork for our raffle which Chris Hampt on of Seatoun Arts and Crafts was thrilled to win.

Also, thanks to Nik and Phil of Rex Street Jazz for wonderful entertainment on Friday night’s opening. And, of course, we must add a huge thanks to those members who came and set up the exhibition – an amazing turnout and slick installation. We do it well – our members being mindful of the residents who live at Rita Angus, and they enjoy having us there for the weekend.

We are so proud to have won the Resene Community Award and congratulate Phil Dickson for his great design and to all who lent a hand in its construction. A wonderful effort and a proud achievement for our club. Our success and Resene award was, in no small way, due to a year’s effort from Linda Smith.

And it’s been a few years since anyone has bothered updating our s crapbooks but Linda has been doing a wonderful job on one of these, which will make it so precious for years to come. Thanks Linda for all your work for the club.

It was a relaxing get-together to end off what was a busy year. Thanks to all who contributed their time and to those who baked for our usual scrumptious table. Our parties are always a good way for everyone to catch-up with friends and to meet members from other groups.

Miranda Munro is holding another of her popular workshops on Saturday, March 11th, and a
reminder that Subs are now due.

It’s good to see everyone back in their groups and enjoying their painting and I wish you all a
happy year of painting to come.

Lynne Jagusch
We are saddened at the passing of a very valuable and popular member, Lynne Jagusch, who joined the art club following our 2011 Art Trail. Lynne enjoyed many of our workshops - latterly, Juliet Best with gold leaf. She excelled in floral painting, being an avid rose grower, pruning for the Home of Compassion and Rose Gardens.

Lynne was also a keen member of the Kairangi Bridge Club and enjoyed many travels overseas with friends and family in retirement. Our deepest sympathy goes to her family. She will be sadly missed. 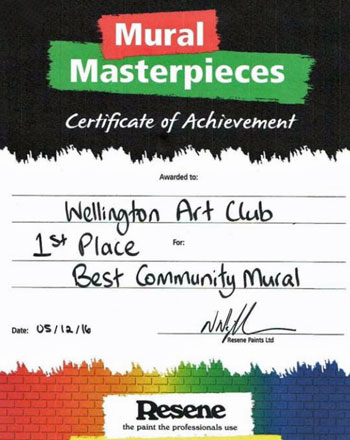 Our Mural has won First Prize!

Our Mural on the Community Centre wall has won first prize in the Resene Community Mural Section with a prize of $1000.00 of Resene products. This is in the form of vouchers, and so far we have sold off half of them for cash. Vouchers are valid until December 2017 and Resene say their paints will last at least two years unopened. Anyone planning to paint their house soon may be interested in purchasing them. Resene also said they do ready-made drapes that can be ordered at any of their stores.

A unique mural has been designed by artist Phil Dickson for the Miramar Community Centers north east wall. Depicting an earlier Miramar scene the mural is made up of 42 wooden tiles and each one was painted by a different person.

Congratulations and thanks to all the club members who contributed their time and energy, making the mural possible, and special thanks and congratulations must go to Phil Dickson who provided a great design.

Thanks to club member Mary Mitchell who designed and painted the mural of a palette with brushes and tubes of paint for the front of the clubrooms. The palette was painted onto a cut-out piece of ply left over from the mural on the hall next door. Judy Langham kindly helped by painting the tubes and their labels. 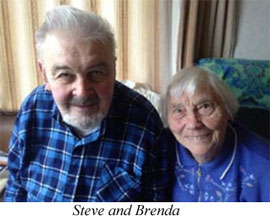 Born in Calcutta (now Kolkata) to Scottish parents where his father was a jute factory manager, John, who came to be known as Steve, was taken ‘home ‘ to Dundee at age 3 where he eventually went to school at the Harris Academy. At the age of 12 his education came to an end when war started in 1939 and the family moved to England.

In 1944 Steve volunteered to join the British Army (The Black Watch) and stayed in the Army at the end of the war. He served in India, Egypt, Palestine, Cyprus, Malaya/Singapore and British West Africa. One day while serving in Ghana Steve was given a packer’s slip from an English toffee tin with a girl’s name and address pencilled on the back. This was in 1954 and a pen-friendship followed, resulting in marriage to Brenda in 1957.

Two daughters were born to the couple and Steve left the army in 1962. Using his long service gratuity, he bought a passage on a Dutch liner to New Zealand and the little family settled in Wellington. After a variety of jobs, Steve started at Wellington Hospital’s Medical Records Department and Brenda became Ward Clerk in Ward 32 (Neurosurgery) where they both worked until retiring in the early 1990s.

Always interested in drawing and art, John joined the club in 1984. It was held in the then disused Miramar Fire Station, where the Public Library is now. He remembers past and present members including his great mate, George Linklater- who helped and encouraged him in the early years of his membership - George Short, Anne Radford, Margaret Christie, Elsie Nichol, Len Maxim, Audrey Griffin, Colin Dickie, Jeff Collings, Phil Dickson to name just a few.

He was a committee member for six years. The biggest change in the club was the building and occupation of the present Club Building and the increase in ratio of female members to males as years went by.

Steve considers himself more as an illustrator than an artist. He likes to envisage real events and to use his imagination as far as he can, referring to pictures for accuracy of details. “Art nowadays seem to
accept the use of copying from existing art works and photographs; these used to be frowned upon.” says Steve. “Club Membership was once approved by the Committee by the samples of an applicant’s work, which seems quite ridiculous now” he added.

“I suppose I’ve been influenced by almost every artist’s work I’ve looked at, particularly those who work in a realistic and carefully representative style. I don’t like or understand abstract or surreal
paintings and have never tried it,” - he said.

Steve and Brenda now live happily in a retirement village where his current activities are making small air-dried clay figures and Googling lots of information on the iPad.” “Hopefully, my best work will be the next one”, he added.

Subscriptions Are Now Due.

Fees can be paid in
the following ways:
1. Direct Debit to the Wellington Art Club account 030578 0903273 00
Please advise the Treasurer if you use this option.

2. By leaving your payment in an envelope in the box in the Art Club

All artists are welcome to gather once a month to paint or draw outdoors from 10am till 12 noon.
All Mediums are welcome.
There is no tuition but it’s free and open to all levels of experience. Lunch or coffee in a nearby café.
This is a great opportunity to meet, learn and socialise with other artists. Phone Martin Jenkins: 027 604 7329 or email apdc@paradise.net.nz